I'm am so tired of this disease, it wears on me every day. The pain, the fatigue, the disability, and no one knows what to do about it. No one understands why I am having such a hard time with it. Tonight, I tripped, now a usual occurrence, in the kitchen and cut my arm..... no it doesn't need stiches or anything, but it's just another example of how screwed up things have become.

I'm hoping to get GBS some national attention in the coming months. I happen to know a nationally syndicated radio talk show host, and I am thinking about approaching him about an interview spot. In the mean time, I recieved some materials to give to the hospital ERs so that the docs will be better able to recognize GBS when they see it. All research into this matter shows that the faster a patient can get treatment the better (and faster) their recovery is. Cross your fingers, hopefully in the near future we can get our cause into the national spotlight.

Another Problem, Another Pill

It's an amazing thing this medical technology. I was diagnosed with sleep apnea, and in the process, came down with another case of pneumonia. This time they believe it was because of inhaling the byproduct of acid reflux. After much debate about doing another treacheostomy they (thank God) decided on trying out another stomach pill. It seems I am on so many different pills that it's creating a sort of evil witches brew in my stomach causing a great deal of acid. So, the solution seems to be taking a combination of prevacid and an anti-neausea medication. I guess the worst part about the whole experience (besides being in the hospital yet again) was facing the possibility of going back on the vent again at night (every night) and, having that big stinkin' whole in my neck again (the scar is bad enough). Needless to say, the possibility brought back many bad memories. If any other GBS'ers have had this problem, please leave a comment.

I know, I know. I've been horrible about posting lately. I've got a good excuse though. First, vacation, then another bout with illness, namely pericarditis. Now, I'm going to see a chronic pain specialist. I know chroic pain messes with your head but I'm not so sure I go for some of the techniques this guy is talking about. I guess I'll give it a try, at thisi point I don't have anything to loose. In the mean time I promise to keep you all updated on how things are going. 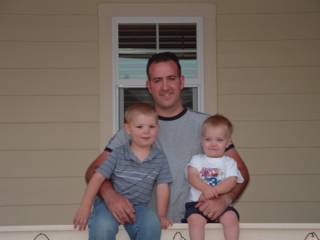 This is my brother and my two nephews

I have been purposefully (maybe not such a good idea) trying to relive some of what I experienced when I first woke up. Part of the reason for this is to answer some long standing questions about what actually happened those first few blury days. The other reason is to deal with the fact that I almost died and my life was irrevocably changed forever. I put this last part off for a long time, I just wasn't ready. Here's what I've discovered.

If anyone wants to send me a present for christmas this year this is definatly on my wish list.